We recently decided that a new RV was in order.  Uh, well, perhaps I should say an additional RV.

We decided that we would like to have a more mobile unit to pull with the Durango.  Our original thought was that this would be perfect to stay in when we went to KS to see our son and visit our doctors.  Having 3 dogs makes options limited.  We do have friends who have full RV hookups at their barn and we always have a great time with them.  We call them Big Daddy and Big Mamma.  This is another story though.

So, we set a price that we wanted to pay and went in search of our "Vacation Home".

We found a 1970's beauty that had no title and only SOME busted pipes, one that was about 100 miles away that looked good, but needed new tires due to checking and was a bit larger than I thought I wanted to pull with the Durango, and the cute little honey that suggested with was a honeymoon/hunting cabin.  Oh my!!!!  I think the gun rack put that one right up to the top of the list!  There was the one that had the "pretty blue curtains that enhanced the windows"--not a lot of info other than that on that one.


I spotted this one as I was driving down the highway... 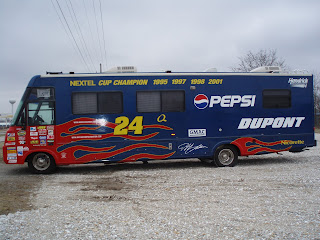 and the NASCAR fan in me went a little nutty--however, I couldn't figure out how to pull it with the Durango--perhaps it could have pulled the Durango???  Well, right team, wrong driver...

Then I called Loveall's in Columbia, MO.  I talked to Dan who told me that they didn't have anything in my price range at the moment, but one was going to be coming in as soon as the owners could get it out of their muddy yard if I had time to wait.

Sure.  Didn't need it til April probably.

Dan sent pictures of the unit just to wet my appetite.  Actually, he was very nice and kept in touch the whole time.  I was definitely interested!

On March 9 he called to tell me that the camper would be in the next day.  Thursday is the day that dad and I deliver Meals On Wheels, to I told him we could be there after 2:00.  Dan said he would hold it for me and once I saw it, I bought it.  Dad and I had a great time looking at the camper I bought and at some big toy haulers they have in the lot.

The people at Loveall's are just GREAT!  From Dan Oswald who sold it to us to the business office to the technicians--they ALL show pride in workmanship and are there to help in ANY way possible.

This is the COMPLETE OPPOSITE of the AWFUL experience I had with Camping World in Strafford, MO when I purchased the 5th wheel.  If you want to know how terrible Camping World is, just go here to read my story of THAT!  Phhhttttt!!!  Still makes me hissssssss...

Back to Loveall's who are GREAT!!!!  The Loveall's tech went over the whole camper with us bumper to bumper on the outside and then all the way through the coach--making sure that all questions were answered and not trying to hurry us along or anything!

Then, they went over how to hitch the camper properly with the weight distribution hitch and the sway bar and we were off!

I would truly recommend Loveall's to ANYONE!!!!  Go see Dan and tell him I sent you!!!  Then, take it to Kan-Do Kampground for a nice vacation!  (Unapologetic commercial here!!!!) 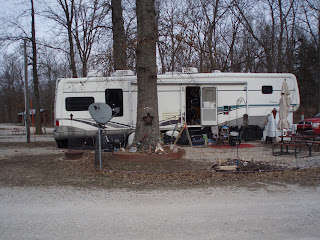 Originally, I was going to drive it to KS in April and leave it there, but when we decided it would be a good office and then decided that it would be a great guest house too, we spoke with the owners of Kan-Do Kampground who said we could park it on the same site with our 5th wheel.
This is the site and I figured it would fit inside of the fence just fine if I changed some of my "stuff" around.  I measured and moved the burn ring and picnic table.  I measured between the tree and the satellite dish to see if I could drive between them--Durango is 7 feet wide, 8 1/2 feet between the tree and satellite dish--okay.
I have dubbed the new camper "Little Blue".  Why?   It just came to me.  It is much smaller than the big guy there and has blue on the interior, so Little Blue it is!
So, meet Little Blue... 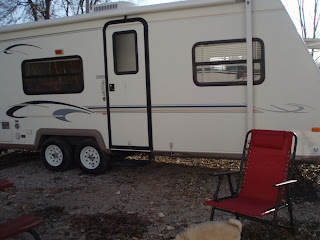 He's a 24 ft Rockwood and he fit perfectly into the yard...see the fence surrounding it? 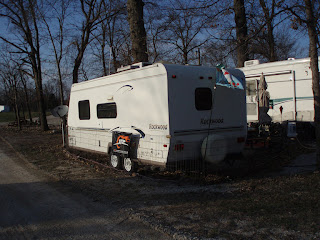 This is how it looks when you enter 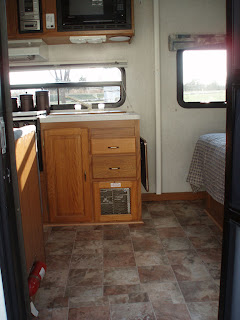 He has a queen bed in the front 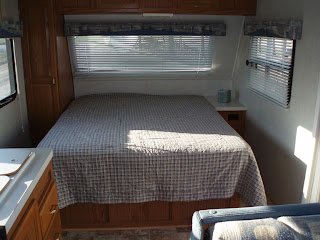 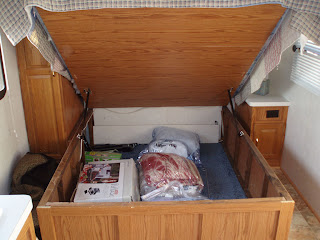 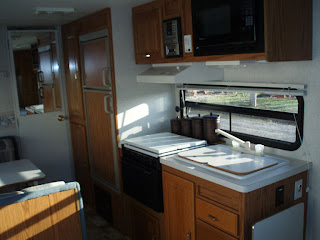 There is a 3 burner stove 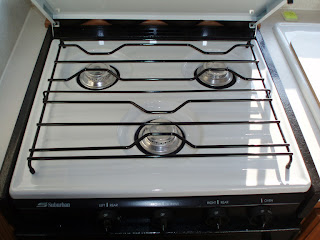 and a double sink 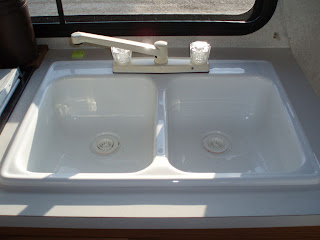 along with a microwave and drawers and cabinets that have solid wood fronts--nice in a smaller camper!
Across from the kitchen is the dining area 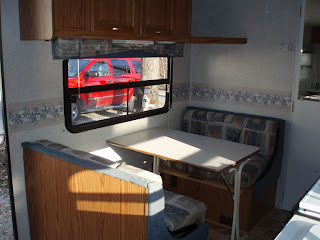 The table goes down and it turns into a double bed (if the two people are smallish).  This would be hubby's desk as well.

There is a bath in the back with a sink 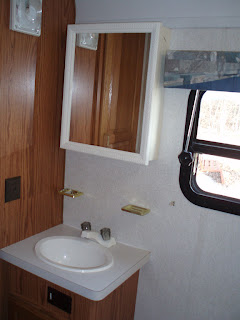 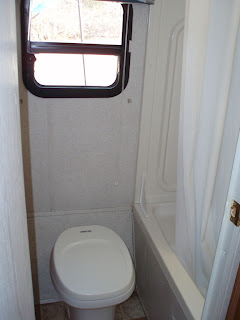 and a shower with a little tub 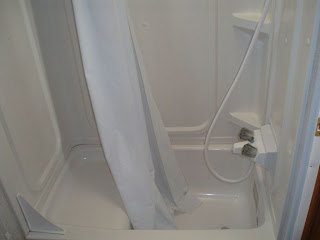 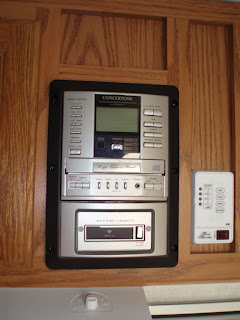 Everytime he goes into the camper, he turns the stereo on--just for fun!

Tango, Frank and Tank gave it two paws up 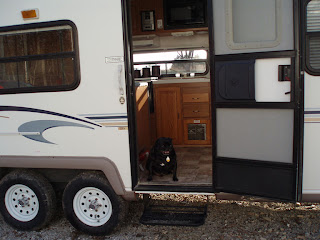 My fellow campers who are just popping back out to their campers were sure surprised to see TWO campers this year!  It sure started some speculation and conversation.  Several came over for the grand tour and to chat.

Some gave us nicknames like Garrett Corner, Garrett Compound, The Compound--who knows what else.

We call it Garrett Square and Home... 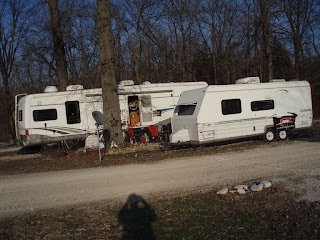