Technical Tuesday...The Ears Have It...

I approached Gman and told him that I wanted something for Mother's Day.

This surprised him--because when I want something, it is usually a powertool or something and he just says "buy it".

When asked what I wanted, I told him I wanted a Tank.

His surprise turned to shock!!!  Talk about the ultimate powertool!!!! 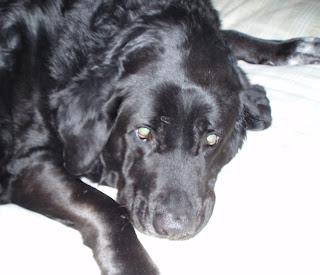 I found him at Petfinder.com.  He was at Furry Kids Refuge in Lee's Summit, MO.  They are an organization that rescues animals from abuse and high kill shelters and houses them in foster homes.

We lived in Augusta, KS (near Wichita, KS) about 3 hours away.

We adopted a black pug from Furry Kids the year before as a companion to our fawn pug.  He was wonderful, but I really missed my big dog.  I had been looking at the Furry Kids and kept coming back to Tank.

So, I called Furry Kids to inquire about Tank.

Having pugs and cats, I needed to be sure that Tank was good with both.  As it turned out, Tank was fostered at the same home as Tango was, so they had already been together.  Furry Kids tested Tank with cats and found him to be good with them as well. 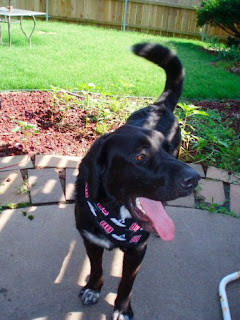 You may have noticed him on my posts??? 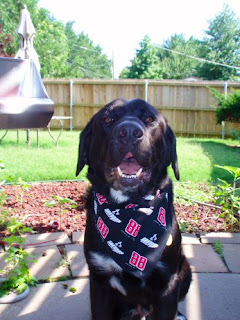 Here he is all dolled up for the NASCAR races in this pic--showing the colors of his favorite driver...

and here he is on "his bed"

Actually that is OUR queen sized bed--just in case you are having trouble envisioning the size thing...

He uses the bed during the day when Gman and I are not in it.  Otherwise, he has chosen this as his bed... 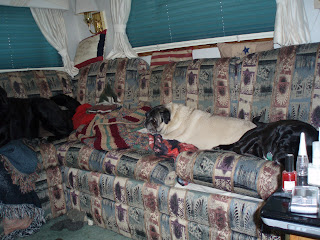 Back to the story...

We were told that he had an ear infection and was on medicine.  If we wanted to wait, they would complete the treatment and we could pick him up then, or we could take him along with his meds if we chose.

Well, having had dogs for a long time, ear infections and meds were common and not a problem.

We headed home.  He was the greatest dog!!!!  Wonderful riding in the Durango--you could forget he was even back there!!!!  I have NO IDEA who could have given up this dog, but MY LUCKY DAY!!!! 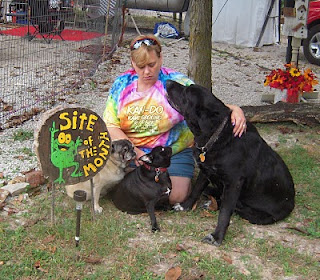 So, we started out with me cleaning the ears and administering antibiotic tabs along with ear ointment.   I am sure it hurt him.

When the meds were finished, he seemed fine, but within a short time the infection came back.

I took him to my vet to check the ears and came home with more ear wash and drops.  This happened many times.
Tank was starting to run from me when I approached--I mean, after all, I was just hurting him.  For about a year.

And the infections continued to come back or not even go away completely!!!!

We dropped more than $2,000 on his ears trying to get them cleared up!!!!  I was at my wits end!!!  My poor baby was uncomfortable and was getting more and more leary of me--who kept hurting him... 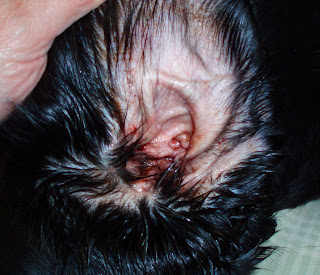 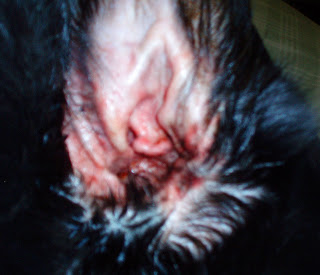 With nothing to lose, I turned to the internet.  I googled "canine ear infection cure" and found a LOT.

I began reading about ear infection horror stories in which people reported that they couldn't even stay in the same room with their pet due to the overwhelming stench!  One even reported that their vet wanted to remove the ear canal!!!!  ARE YOU KIDDING???!!!!!

Then, I found out about a miracle called Zymox. 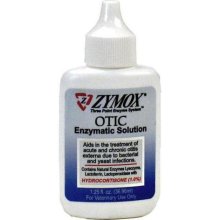 Zymox is a homeopathic enzymatic solution that you put into the ear.  You don't clean the ear because the enzymes need something to "eat".  The enzymes are 3 enzymes found in milk.

It comes in two formulas--with and without hydrocortizone.

Given Tank's ears, I chose Hydrocortizone to reduce the inflamation and the itching.

You just put the solution in the ears beginning at twice per day and let it do it's thing!!!!  Easy Peasy!!!

Within a week, his ears were beautiful and clean and perfect!!!!

Given that his ears are so large and heavy 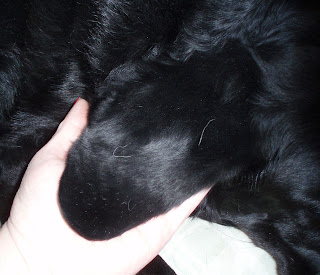 he is prone to infections.  Especially around May and October when the allergens are running rampant through the air.

Now, when his ears get itchy (like last night) I just grab the Zymox and treat the ears right away.  Within a short time the itching is calmed and in a day or two, the enzymes have done their job and cleared out the gunk!

Zymox is a MIRACLE!!!

And now, Tank and I are both resting comfortably!!!! 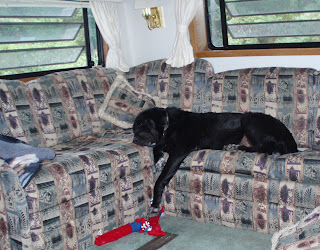