While living in Missouri, we went to a town called Herman. 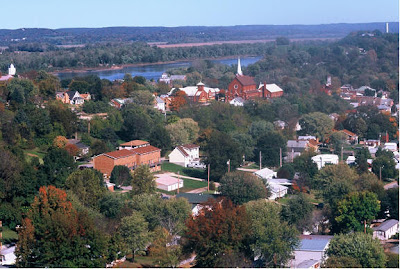 Established in 1837, Herman was settled by German settlers who founded this town.  Nestled on the banks of the Missouri River reminded them of their home country.

It is home to many beautiful wineries and breweries as well as lovely architecture and food and we really enjoyed visiting the town on a regular basis.

On this day, we ended up in a little cafe in town that touted all the frog legs you could eat written on a chalkboard outside.  Something in which I did NOT imbibe, btw  I just couldn't get this out of my mind... 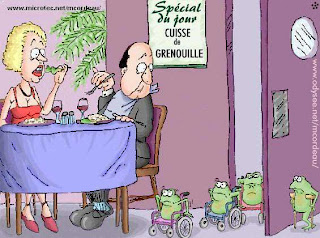 Upon entering, we were struck by the ceiling... 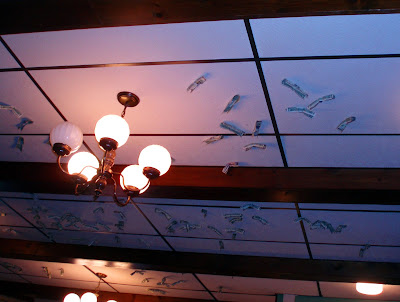 We sat in a booth and as we perused our menu, we were met with the story of the ceiling: 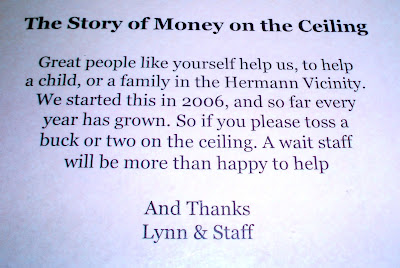 Hah!  What a GREAT way of giving back to the community!  Collecting money a dollar at a time (or more if you are like us, because nobody can do this just once!) and making a game of it.  What fun!

So, here is what you do:  Take a thumbtack and put through George's nose.
Take a quarter and put on the top of the large disk part of the tack (not the point).
Fold the dollar lengthwise in thirds around the quarter.
Fold the long thin dollar that is created around the quarter to make a tail.
It will look like this: 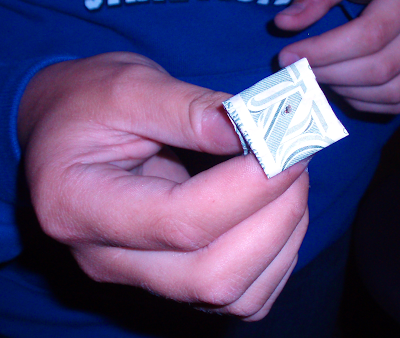 Do you see the little dot there on the down stroke of the "N"?  That is the point of the tack...

Grasping the tail created by the two ends of the dollar that are folded under the quarter that is inside, give that little sucker a flip towards the ceiling!

You have to flip it quite hard.

G-Man got his to stick into the ceiling on the 2nd try.

On my second try, I almost broke the coffee pot behind the lunch counter across the aisle from our booth after which I turned it over to the "pros" aka, the wait staff.

They just gave it a little flip and it stuck right in the ceiling tile--of course!  :) 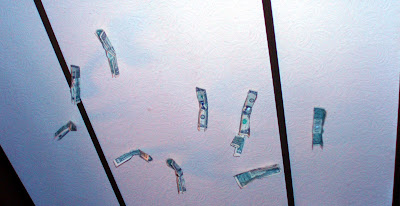 Can you tell which ones are ours? 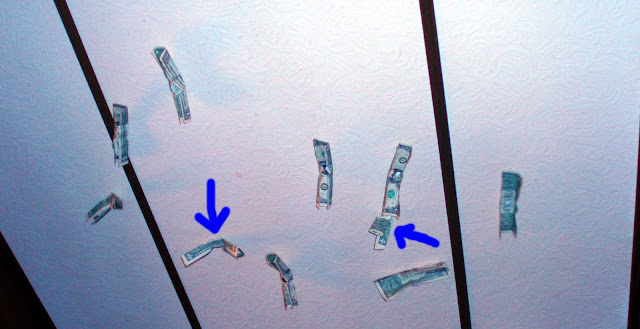 You'll notice that our dollars are still wrapped around the quarters.  Actually, you will notice there are 4 of them...  Too much fun not to go a second round!  ;)

When asked if we they got a ladder to remove the quarters, we were told that no, as the days go by and especially on days that are more humid, the dollars relax and quarters rain down on the floor (or whatever is under the dollars) and then they just pick them up and place them in the fund.

How fun is that!  Have some fun and help some people out too!  Win, Win!

What is the most fun/creative way you have seen for collecting funds for helping people?

Thanks for stopping by Happy Hump Day...

Hope your day is great!