Captain Morgan and the Chicken... 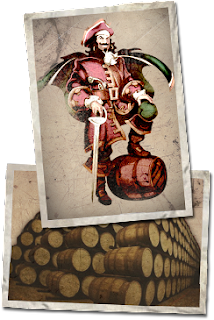 I confess...I am a booze hound!
Oh calm down!! I didn't say lush!
I love to COOK with alcohol!
Back in 1996 Jim and I decided to lose weight. We went on a low fat diet. This was a good thing! We ate 5-6 meals per day--each having protein and veggies and some carbs if you still wanted something. Believe me when I say, with that many meals per day, it is virtually impossible to overeat--but you also had to have very low fat!!! We did lose quite a bit of weight!
Well, fat is a main flavoring in most American diets. Whether it is butter, animal fat, vegetable fat or fat laden gravies, desserts, toppings or even salad dressings!
Needless to say, it was a HUGE change for us during which time I had to learn once again how to cook.
Many of my friends helped out with recipes and one in particular taught me how to take any recipe and make it tasty by switching say oil in a cake or brownie to applesauce. It comes out yummy and lowfat at the same time. We actually liked it better that way!
Oh and I was also introduced to things like beer for pizza crust to add flavor. So, at that point I was certainly a fledgling, but did dabble.
Fast forward to January, 2002. Jim has a heart attack which should have killed him outright. Half of his heart is dead to this day. He amazes the doctors no end! Of course, we know it is a miracle and God has plans for him.
However, not only do you have to watch the dreaded fat, but also sodium! I mean--REALLY!!!!! Take the fat and sodium out of the American diet and you really DON'T have flavor!
So, I tweaked my cooking once again. I began to search out ways to add flavor while not adding fat OR sodium and I enlarged my knowledge of alcohol in cooking. It is GREAT!!!!
I marinate my chicken in vermouth or dry white wine with lemon and pepper while marinating my beef in hearty red wine or add beer along with garlic, onion, fresh ground pepper melange (there truly IS a difference between fresh ground and the stuff in the shaker!), etc.

So one day while watching my new favorite low budget show, RVTV on the recreation channel, they had a Captain Morgan Shrimp recipe. This is compared to Sweet & Sour Shrimp from the restaurant. Now, I change shrimp recipes to chicken because I am quite allergic to shrimp and it isn't a pretty sight if I eat that!
I made my Captain Morgan Chicken tonight and put it over rice that I cooked with carrots and broccoli and it was GOOD! NO! You may NOT use rum extract! Thought I would just get that in for my mom! ;-D
Here is the breakdown (restaurant version/Capt Morgan Version):
Calories 330/110
Fat Grams 23/4
Cholesterol 160/160
Sodium 1,928/300 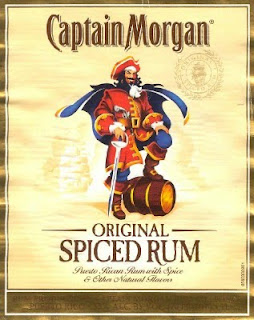 One assumes that the cholesterol is from the shrimp since it is the same for both recipes. I know you are just chomping at the bit for the recipe so here goes:
This makes about 2 servings:
In a small pan over medium high heat, put 1/4 c brown sugar and 4 oz spiced rum and mix until sugar is melted.
Next, add hot sauce to taste. I used Great Value Louisiana Hot Sauce. Put a lot if you like it more spicy and less if you like less spice. However, it will not be hot because of the sugar, so I went pretty heavy. Just taste as you add it.
Now, add the chicken, shrimp or other meat. I used two small boneless, skinless chicken breasts cut into about 1/2 inch squares. Cook until the meat is done--won't take long!
I then added about 1/8 tsp of cornstarch to a little more spiced rum and mixed it in a small cup until smooth and then added it to the pan which thickened the sauce.
Pour it over your choice of cooked rice or add to a salad or as in the RVTV episode, some grilled corn on the cob. You will be surprised!
So, I now have a new man in my life!!!! Welcome Captain...
Posted by labbie1 at 5:40 PM