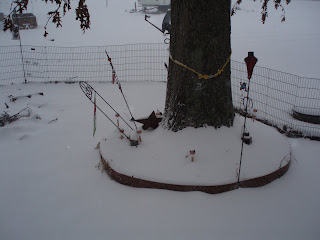 Here in the Snow-me State, we got Snowmageddon twenty eleven.
It was certainly broadcast well in advance and we were quite prepared--well kind of. I mean how many times have the forecasters said it was going to be a huge snow only to have just a dusting.
Of course, there are the times they say it will be a flurry and we get a foot!!!! I have always laughingly said that I worry most about the times that the weatherperson says flurries.
This time, the weatherpeople had it right--nearly to the minute!
I had my water, I had my propane all filled. I filled up my Durango and backed it up to my 5th wheel so I could hook up to it to run the heater fans if the electricity went out for more than 3 days. I had candles, batteries, flashlights--my phone was charged, my MP3 player was charged and filled with books to which I could listen. I had my blankets ready and I had my 3 dogs and one cat to keep me warm. Okay mother nature--do it if you must!!! 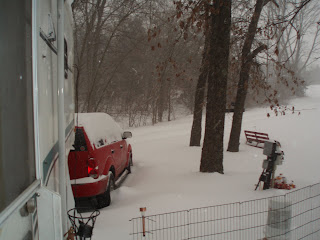 And she did! It made me feel like I was in the old Parkay commercial where Mother Nature raises her arms and yells "It's not NICE to fool Mother Nature" and lightning strikes and winds howl...
It started off fairly slowly, but soon, the flakes began to get larger and larger. 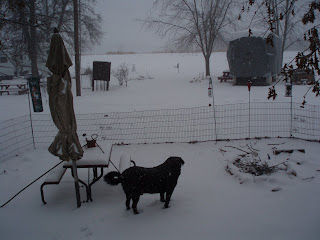 In short order, the wind decided to get in on the act and we had white out conditions! 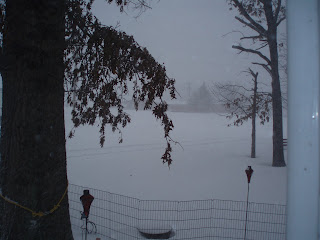 The ring around the tree is my little flower garden. It is about 10 inches high. It gives a good guage of how things went. 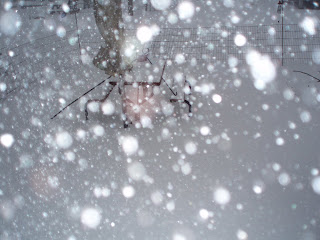 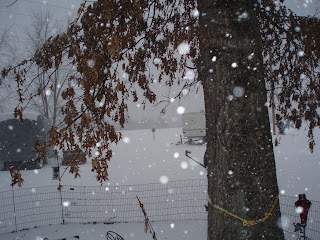 Through this tree limb, you should be able to see the large sign for Kan-Do Kampground. Uh-no said Mother Nature!
My niece works in another hospital down in St. Louis (a good 50-60 miles one way from here). She also had to stay at work--2 nights before she could get home and her relief workers could get in to work.
My nephew works at yet another hospital in Jefferson City--He was also caught. 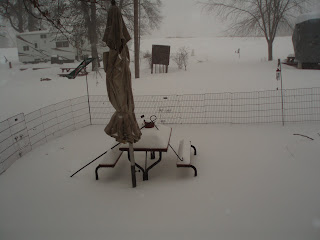 This picture shows the view towards the lake and service road--which could not be seen during the snow.
My brother has a trucking company. No loads all week! First the weather was so bad that he could not be on the roads and then the warehouse lot had so much snow that it could not be cleared out. 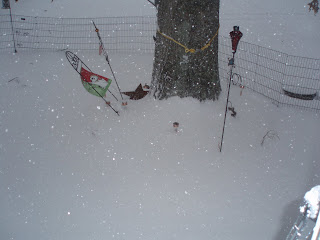 What a time! The newscasters couldn't go anywhere and being near a major university (Mizzou) with a major publications program, the young broadcasters had some fun and did a special video to Ice Ice Baby by Vanilla Ice.
You can see that my garden disappeared.
We had a little over 20 inches on top of our previous several inches.
I-70 was closed from KC to St. Louis. The first time EVER that it was closed all the way across the state!!!! 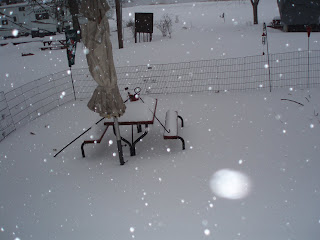 The picnic table had a nice layer on it too!
The Durango was getting buried and was a joy to get out when I went to pick up Jim a few days later! 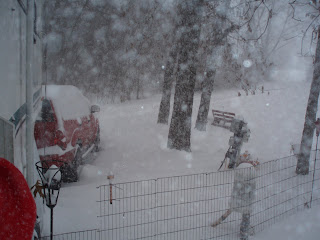 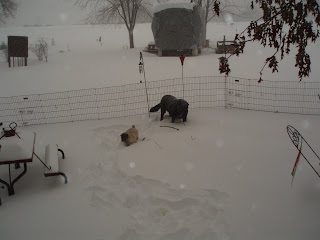 Tank is a really good snow plow for the little dogs though! 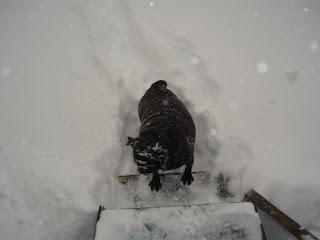 Even so, poor little Tango didn't realize the last step was not the ground and went face first into the snow!!!!
Oh, and the weatherman says this is an El Nino year, which is typically mild. Also typical, the 2-3 years AFTER an El Nino year are WORSE!!!!
Thank goodness for Global Warming!!!!
Posted by labbie1 at 6:02 PM