Missed It By THAT MUCH... 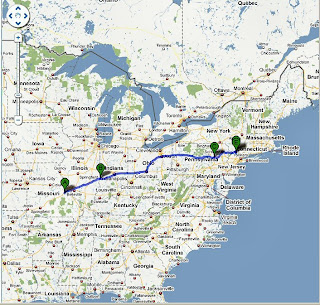 Okay. All of you Get Smart fans will truly "get" that title! If you are too young for that, go check out Nik at Night...It's a really fun show! When we left the last blog, the repairs to our new home were complete and we hitched up to Tom's truck and were ready to take off. Tom has a Dodge Ram 3/4 ton pickup with tow package and heavy suspension, a cummins diesel engine--and 220,000 miles. He is the best driver that I know and I wouldn't want anyone else to drive my 5th wheel if I have a choice. So, off we went. We parked at the rest area on the state line of IL and IN just on the Indiana border. It is a really nice rest area and even has designated RV parking! I figured we would be parked between the semi trucks, which is just fine for the night, but this was great! Tom parked in the first RV space and I parked in the "car" space right next to it. This gave us the opportunity to try out the onboard pump--which worked great! We didn't put out the slides, we just hit the couch and bed--Tom got the couch with Tank to keep him company and I hit the bed with the flat screen TV and two pugs to keep me company. Next morning, we were up early and heading on down the road. Everything was going well. We stopped often to let the engines cool and let the dogs "walk". Somewhere around noonish, we started hitting the mountains--those would be the Appilachians of which the Poconos are a part. 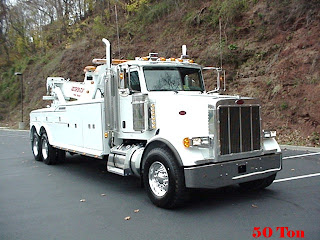 The guy arrived in a huge wrecker. Not those wreckers that we see all of the time--this is a wrecker like you see on Wrecked on SPEED TV! Kind of like this one... Yep--That should do the job! Well, turns out it was Charles Hockenberry, who owns the company. He told us that everyone was busy because of the rain and the mountains and people were wrecking, so all of the wreckers were out. He is about my age and has several trucks. His sons and daughter work for him as well. He just happened to have just finished a job and was ready to hop in and help us! Nicest guy you would ever want to meet! He was nice and told us about the area as he attached the hitch to the back of the truck and then hooked us up. Then, of course, our light connection was not the same as his, so he put his portable lights on the camper and ran the wires to his truck. He asked where we were going and we told him. He looked at our written directions and asked if it was by Suresky's. Not a clue! Don't even know what a Suresky is (turns out it is a large Chrysler car dealership in this area) but he seemed to know where he was going. We followed him up and around the hills and ridges and twisting roads. Not hard to follow him--He had what seemed like a million amber spotlights on top of the truck--all flashing! We got to Florida, NY and went down the center of town following the flashing lights with my camper attached. People definitely knew we had arrived! :-D Once you get to Florida, there are signs all through town pointing to "Campground". You will NOT get lost! We pulled into the campground (I had called ahead to let them know that we had vehicle trouble and would be later than we planned, but were on the way). I was headed into the office when the guy came out. He definitely knew we had arrived! It was quite a site that greeted him--huge wrecker pulling huge camper followed by bright red Durango. What a convoy! I had my wallet out, but he just waved us on, gave us directions to the pull through sites and said to take care of the camper and then head back down tomorrow to take care of the site cost. He looked a little shaken actually. So, off went our little caravan--up the hill. I looked at the 5th wheel in the pull through closest to the road. The front was so far off the ground that the guy could park his giant pickup under the gooseneck! Really? Uh, no! We got out--as did the drive of the wrecker. We asked if he could give us a minute to look at the spaces to find one that was a little more level. Sure! He jumped out and helped us find a good spot. He seemed like he was actually enjoying this looking around, picking out the perfect spot. He found a great one! Then, he pulls out his cell and calls the office to ask if we can use this back in spot instead of a pull-through. Nope. This spot didn't have water and electric, but the one next to it did. Can you believe the tow truck driver actually used HIS cell to call the office for US???? I mean, this guy takes customer service to a new level! He backed the camper in and then with the winch? (Hydraulic lift thingy that picks up a car) on the back of his truck, lifted the camper until it was level to make the process much easier because it was beginning to get darker outside. It was sure a snap to level the camper with the help of him and his truck! He gave me the bill--I gave him a LOT of bills--and we were ready to begin the rest of the setting up process. What a day! But, we were here and ready to set up our home in it's new location. Jim would be up the next day after work. 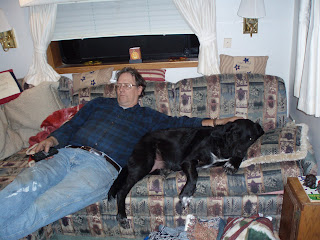 All was well--well kind of--Tom still didn't have his truck. But he did have a new buddy! Uh, and an unhappy wife...in Missouri... Who is gonna KILL me if she ever sees this picture! ;-D 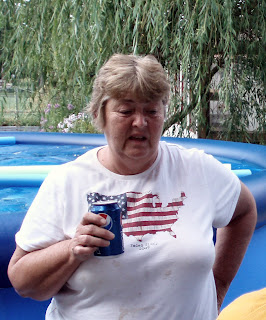