I went to Lambert Airport in St. Louis yesterday--twice.  But that is for later...

As Gman and I drove to the airport, we looked at the devestation around us and it immediately transported both of us to another place 20 years ago and another devestating F-5 tornado that we lived through.

4/26/1991 was a spring day in Kansas and gman's parents were celebrating their anniversary.  We went from Augusta to El Dorado to eat at Long John Silvers--that being gman's dad's favorite place to eat.  Gman's dad kept saying he was done and it was time to go-time to go-time to go.

So, finally gman's mom got her meal in a to go box and off we went.

When we just got to the city limits of Augusta, the tornado sirens started going off and we booked it to our house and the basement.  The dogs howled, our ears popped and it was really uncomfortable.

When the all clear sounded, we went out and saw that the road we had just come down had been crossed by the tornado.  The area we were at in El Dorado was hit with high winds and hail the size of softballs making the cars look like someone literally took a sledgehammer and beat the tar out of them.

We missed it by minutes because gman's dad was so antsy to leave--had he not been and had we not left, we would have been in either the hail or the tornado.  To this day, when someone is cranky and wants to get going, I don't say much--just thinking of that day and how it saved our lives.


You have probably seen that tornado of 20 years ago and just didn't realize what you were viewing.  The footage of it has been shown in documentaries about tornados, TV shows and even movies.  You can view it here:
The part that you have probably viewed begins as 4:27 and goes for about 5 minutes.
You might also remember the video of a little girl and her dad along with a cameraman who happened to be driving along the same stretch of highway running from their cars up under the bridge overpass while the tornado went right over them and the dad saying it's okay.  It's okay.  Everything is gonna be okay.  That was the same tornado.  It was on the ground from Oklahoma to almost Kansas City and was something you never forget.
The footage that looks like a street with stubs of trees and just debris was a mobile home park in Andover that had 219 mobile homes--one was left.  It really truly looked like a bomb had gone off.  Pictures truly do not tell the story until you are there.
The whole town of Andover was pretty much destroyed.  Amazing really!
So, as we drove to the airport yesterday, we could clearly see the path of the tornado.  As we got closer, we saw this (sorry I was taking pictures as I drove, so some are a bit blurry): 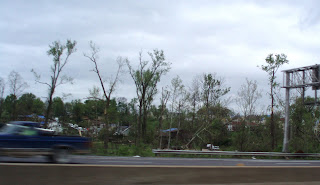 Look at the arrow on the left side of this picture.  You can see by the corner of the building that is left standing that it used to be a log building. 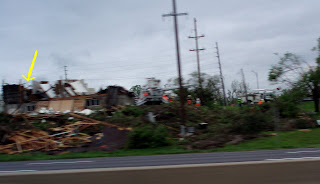 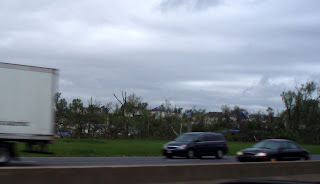 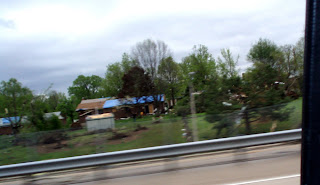 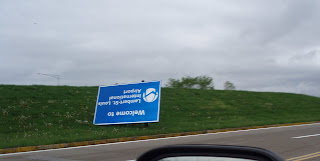 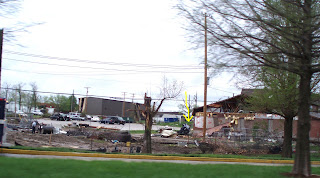 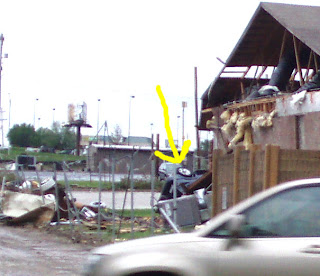 I had pix of the airport itself, but didn't realize I had it on video, so it is a bit of the airport and a lot of my lap and the steering wheel!!!  LOL
As tornados do, The west side of the airport was damaged heavily, but terminal 2 (where Gman flies out) was untouched and you would never have known a tornado was around.
At about noon, I took gman to the airport to catch his flight to Dallas.
He called as I was leaving the airport to tell me that the flight was about an hour late, but was flying, so I went on back toward home.
As I got about 20 miles from home, he called to tell me that Dallas was under tornado warnings and it was unclear how long it would be until the flight left, or if it would.  Ah the joys of mother nature!!!!

So, I called dad to see if he would like to ride along back to the airport with me, called the campground to see if they would let my dogs out to potty (thank goodness for Drew and Kathy!!!!) and turned around to head back to the airport to pick up gman.  ﻿
We got home about 7:30 pm.  I said that I felt as if I had driven to Wichita!  Gman, being the details person that he is, figured it up and said that if I had driven back to the airport one more time and stayed, it would have been the same.
Our thoughts, prayers and support are with the people affected by the tornadoes of this spring.
Posted by labbie1 at 12:11 PM 3 comments: