Sunday dawned cool and overcast.  It was the day to head to Silver Dollar City.  We had 2 day tickets (tickets are 2 days for the price of 1 this time of year), but had to go on Sunday because they are closed Monday and Tuesday during this time of year.  We can see the SDC rollercoasters from the front of the condo so it isn't far to drive on up there. 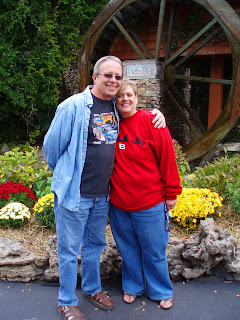 I grabbed my Dale Jr sweatshirt and Gman grabbed a denim long sleeved shirt and we headed to the tram.  We were a little confused as there is paid parking or free parking.  Free parking has free shuttles picking you up and dropping off.  Why would people actually PAY????  Not sure...perhaps someone else knows. 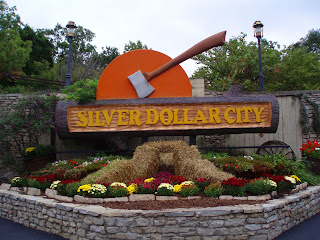 It is the fall crafts festival and SDC is in full color. 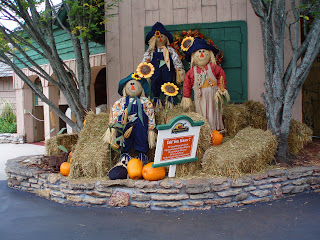 Have I told you that fall is my favorite time of year?  Those colors!  Wow!
There are also craft booths all over. 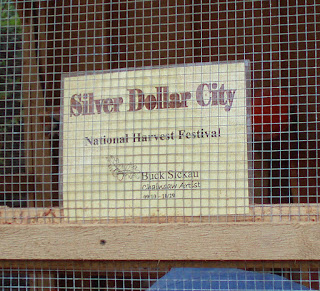 I mentioned the Dale Jr Sweatshirt because it was the cause of a great conversation with one of the craftsman.  The man's wife saw the sweatshirt and we started talking. 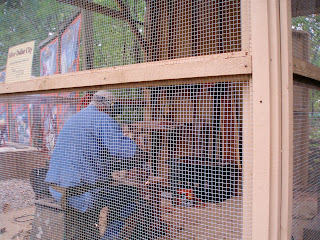 Her hubby who was doing chainsaw carving, took a break to come and chat.  It turned out that they have a relative that lives Dale Sr so they made a chainsaw bust of Dale Sr. for them.  It was really interesting hearing the tale of the chainsaw carving.  We met a bunch of Dale Jr. Fans as we went through the "City". 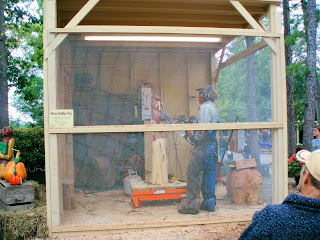 This was a lady chainsaw carver. 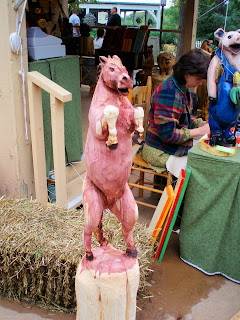 And this is the finished carving.

I was enthralled with all of the craftsmen. 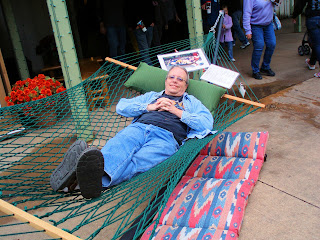 Gman was enthralled with THIS craft!  Doesn't he look comfy? 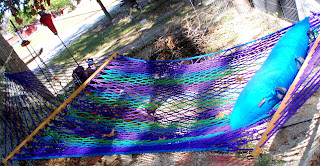 So, for our souveneir of SDC we got one!  But we got the "watercolor" version.  Isn't it cute?  I will be explaining my hammock stand in a later post.  The lady who made the hammock asked me to show her how I made it.

A really GREAT thing this time is that they will take your purchases to the exit point of the park and keep them there for you to pick up so you don't have to carry them all through the park.  How NICE!!!!  I LOVE this feature!!!!!  Good job SDC!!!!

We went to the show at the Opera.  It was really good, but the guy who sang the song "Mariah" was superb!!  It gave me goosebumps when he sang!  Wow!

We missed the other shows.  I wish I was able to see the Birds of Prey show, but we were too late to see it.